How are they doing?

The bees are doing quite fine. However the second colony I got is a bit weaker. Probably because it was already quite late in the season when I got them.

Here is a picture of the 2 hives. 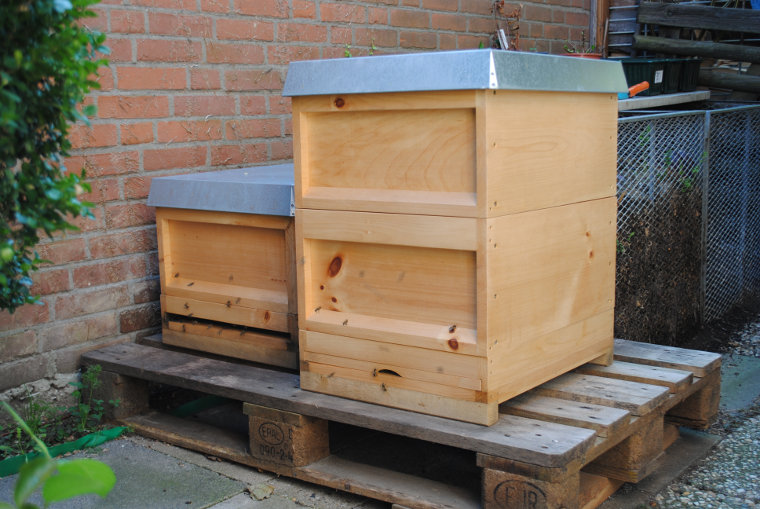 It is already October so the bees are more and more hard pressed to find pollen and nectar. However today was a nice warm day with up to 25°C. So they were quite busy. 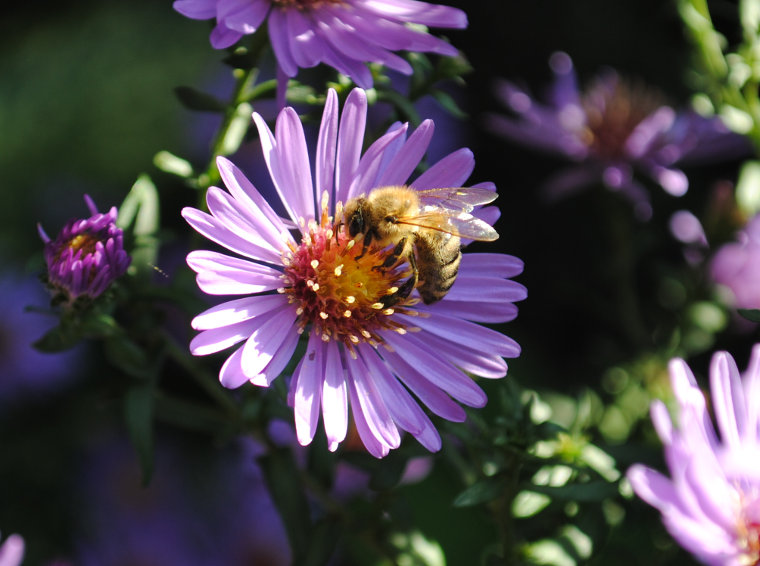 But a lot has happened since my last blog post.

What has happened in the past months?

Here is a little roughly translated transcript from my handwritten "bee diary".

2014-07-17: One bee stung me in the index finger when I was a bit to nosy and had a quick and hectic peek in the hive. Amazingly the bee survived with her stinger intact because squished my finger right when I saw the bee putting the tip of her stinger in.

2014-08-09: Removed the empty feeding box from the second colony. There was a lot of extra honeycombs built right next to it. I had to remove them so that I could remove the whole top hive body again.

2014-08-10: In the evening I put some of the honeycomb pieces I removed the day before in front of the hive. I thought it would be a waste to throw them away. The bees consumed the sugary water quickly and I removed the empty honeycombs.

2014-09-23: Put the varroa drawer under colony 1, added a second hive body on top and placed a Liebig dispenser with 100ml formic acid inside it. The blotting paper was sized down to 1/2.

2014-09-29: Inserted the varroa drawer under colony 2. Removed the empty feeding box. Placed a Liebig dispenser with 100ml formic acid inside the top body. The blotting paper was sized down to 1/2.

2014-09-30: Removed empty Liebig dispenser from colony 1 and also removed the varroa drawer. Took away the top body as well. Checking an area of 5 by 5 cm on the varroa drawer revealed about 220 varroa mites. Extrapolated to the whole seemingly used surface this means a total of approx. 3520 mites and a daily drop rate of 520.

In the last entries from my diary you can see that I used a "Liebig Dispenser". This is basically a small bottle with the top constructed in such a way that the liquid inside drops out slowly. Like some types of medicine bottles. Below the bottle is a blotting paper which gets soaked by the formic acid and then slowly dispenses it into the surrounding air. The concentration of formic acid in the air depends on the temperature, the size of the blotting paper and the volume inside the hive. It is important to carefully follow the instructions. A concentration to high might kill the queen then again too low a concentration will leave the mites unharmed.

This is the Liebig dispenser in action. 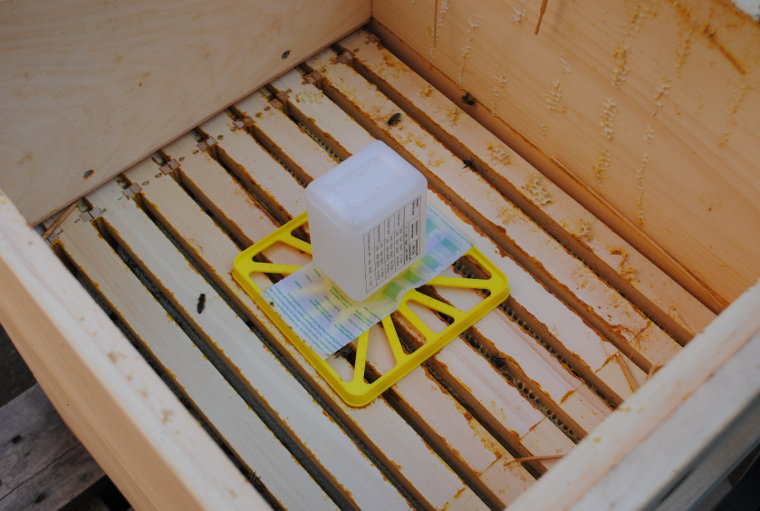 On the side there is a small scale so that you can check relatively easy how much acid has evaporated.

This picture shows the second colony which was weaker all along. I am a bit worried about them. The last days have been quite hot and I hope the concentration of the formic acid has not risen too high.

A quick Peek inside

Today I also could not resist taking a look inside the first colony. It seems quite strong. 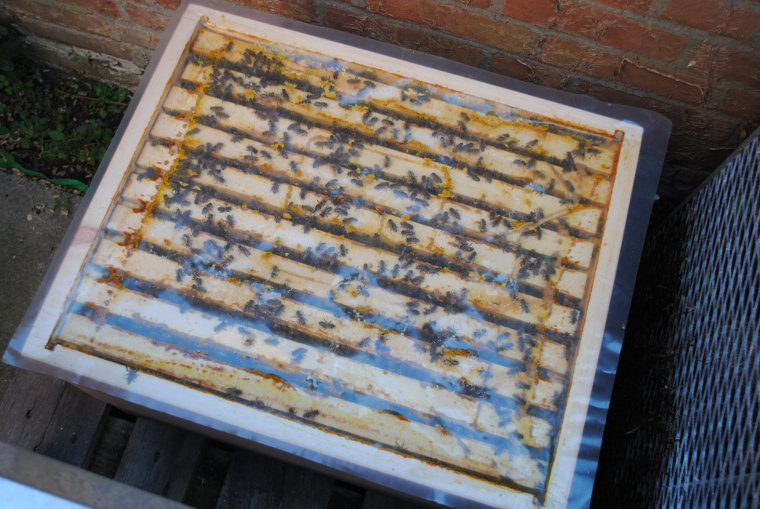 And they spat every nick and crack full of propolis. Well done I'd say :). 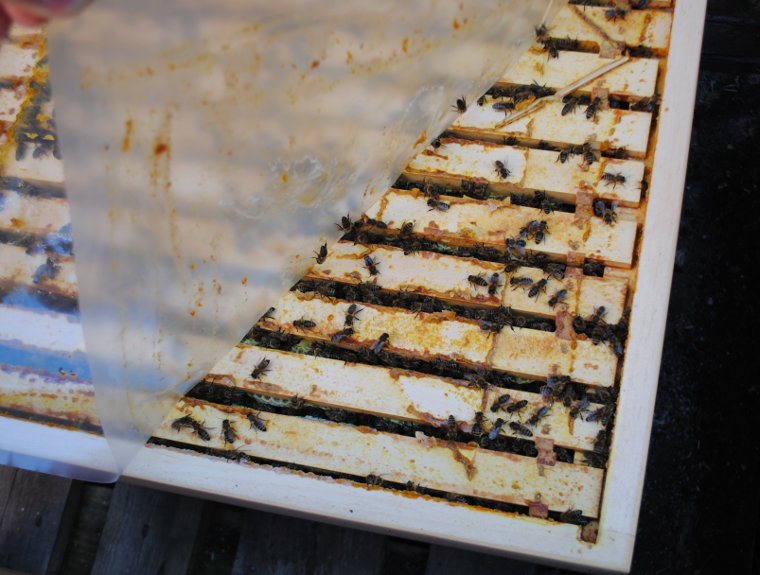 I looked sideways on the frames and there seem to be loads of sealed cells with food inside.

I also watched the entrance of the second colony a bit. The bees are bringing in only small amounts of pollen. However it is always fun to watch them attempting to land. It was also a bit windy so no easy task for a 100mg bee. 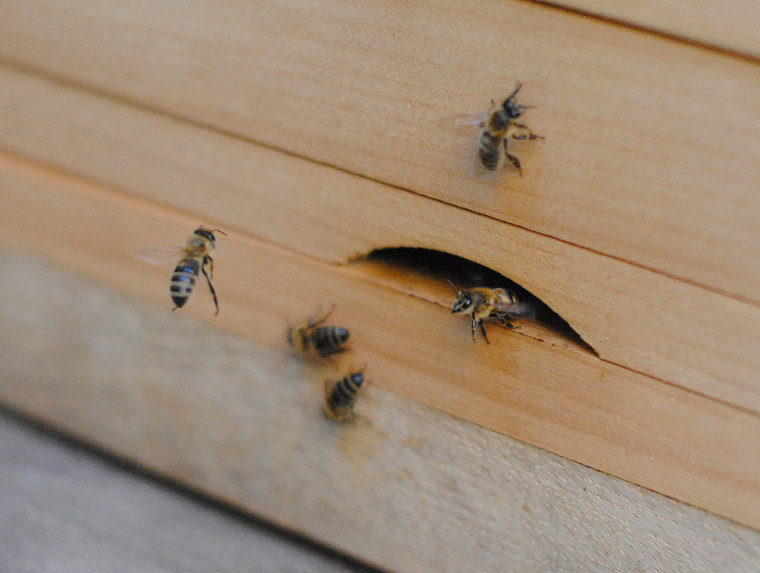 The active bee season is coming to an end. I will watch the number of varroa mites dropping and hope for the best.

And next year it will finally be honey season or so I hope :).

Also stay tuned for the "techy experiments" I plan to inflict upon my bees :).