Maybe a bit of backstory first. Since I was around 10 or so I have been interested in electronics. Maybe even earlier - it doesn't really matter. I distinctly remember picking stuff up when it was bulky waste collection time in my hometown. Even carrying and old record player to school and back afterwards, just to disassemble it later on. And of course to desolder all the components and generally check out how it works. Naturally I understood very little of it at that time. But it time and again sparked my curiosity. I also had a bunch of Kosmos electronics kits to teach me some basics.

With the passing years and well "computers" this did however fade away and I moved to programming. Even studied it a bit always sticking close to the machine.

Since neither electronics nor programming are my main profession right now my programming focus has further shifted to the more abstract "getting things done quickly" department. Python is the tool of choice for me here.

However I nowadays find myself more and more often turning back to the basics. To the electronics and even the physics of it all.

So much broken Stuff

An initial spark to reinvigorate my interest in electronics has been quite simple. My trusty PC monitor just failed. A bit of smoke from the back and a distinctly "electronicy" smell and the screen went dark. I fiddled around a bit and had a look inside. It seemed like it was just the backlight and the only visibly broken i.e. burned part was a capacitor connecting one of the CCFL backlight tubes. The monitor is not yet fixed but I am pretty sure it is just that it is just that one tiny capacitor.

However I was hooked again now - wanting to understand how things work and how to fix them if need be. Because there is indeed so much stuff around you today that just keeps on breaking. Either it is just me, or there is simply so much more electronic stuff around than before, or in fact it is getting crappier and crappier. Or put differently it seems to be acceptable to produce and sell crap. Is the solution in my case now really that my of course out of warranty monitor needs to be scrapped and I should just euphorically use this opportunity to buy a new and so much better one? I thought to myself "No, I won't take part in this." and will instead use it as an opportunity and a reason to get involved in electronics again.

And it seems to be a good time if you look at the whole "Maker" movement which has been getting traction in the past years.

Also it is so much easier to find information in general. You can spend quite a bit of time just watching videos of electronics enthusiasts building, explaining and repairing.

In my online researching endeavours I have come across a lot of resources which are not only extremely informative but also entertaining. I have made it quite a habit to watch videos or just listen to them when I am busy doing some other dreadful IT task. I am still not quit sure how good a habit that is. Does it give you a false sense of accomplishment to see and hear someone else building or fixing something? For now I'll assume it's a good thing. After all it lead me to starting the electronics section of my blog.

Naturally you also need tools to work on electronics.

If you think about it like this instead of buying something new, like in my case a monitor, you can spend the time and money on knowledge and tools to fix it yourself. Sounds well enough. Let's see what becomes of it.

I have still some parts and stuff lying about from up to 20 years ago. And I do intend to recycle some of them in my projects :). However I also need some measurement equipment and so forth.

After some EEVblog videos and an nice forum post (EEVBlog forum) I went for a "Brymen BM867s" Multimeter and am very pleased with it. Here it is in all it's glory with a couple of decent test leads. 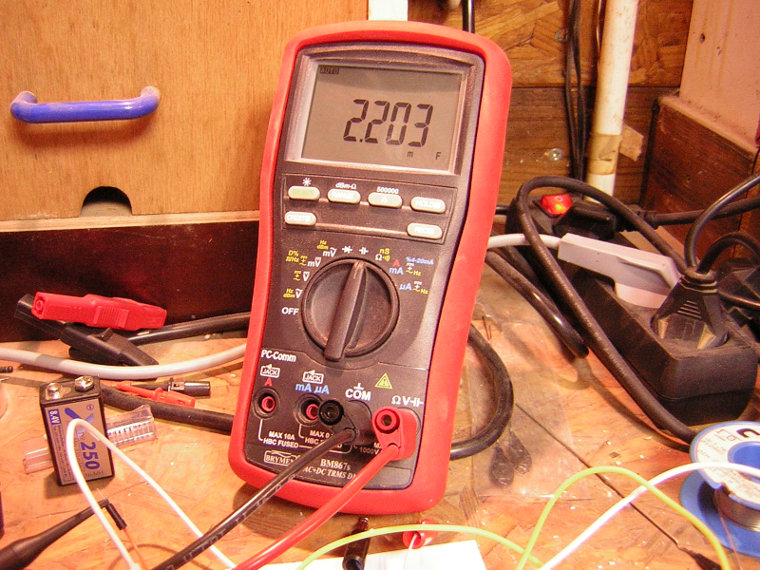 The picture quality is a bit low. It still looks new and fancy in reality. Just bad lighting - another project.

I have never owned an oscilloscope before so I wanted to start with a nice used analog one to "just see" what's going on in my circuits. I had the brand "Hameg" stuck in the back of my mind as being descent. So I scored an HM303-6 35MHz 2 channel scope. Of course the eBay gods struck again and the one I got had a triggering issue. It's a new project itself now. Next try an HM604 60MHz 2 channel scope. This one is also a bit twitchy. The switches are most likely heavily corroded. But I don't dare trying a proper repair yet so I have figured out one setup in which it works well enough.

With the TV separator and the triggering switch set halfway it works :). 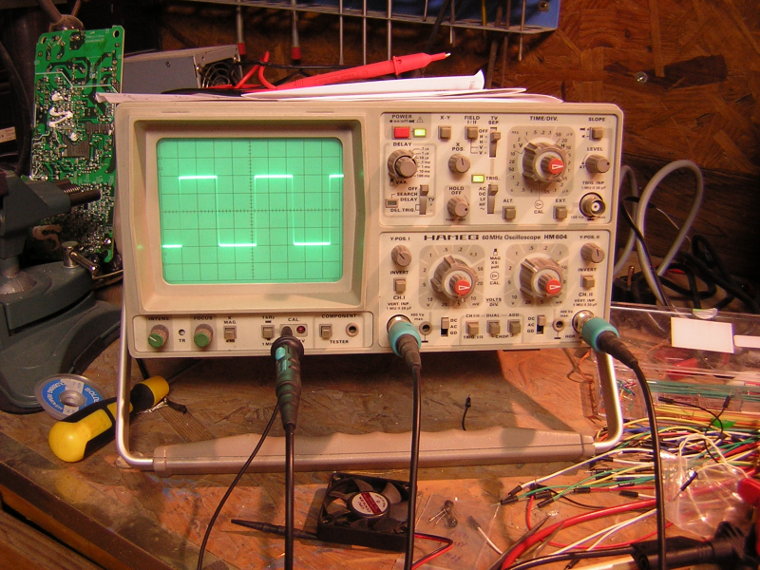 If you are just starting out safety is important. And since I am also about repairing stuff an isolation transformer is a good investment. I bought a used and tested Muuntosähkö / Trafox KLM350-230/230V without any fuss. It works fine but I couldn't help but snipe an old 1700VA adjustable isolation transformer on eBay. Older than me and in desperate need for some repair and retrofitting for safety reasons this TST 280V/6A isolation transformer made in East Germany is now another project on the list.

Here is a sneak peek: 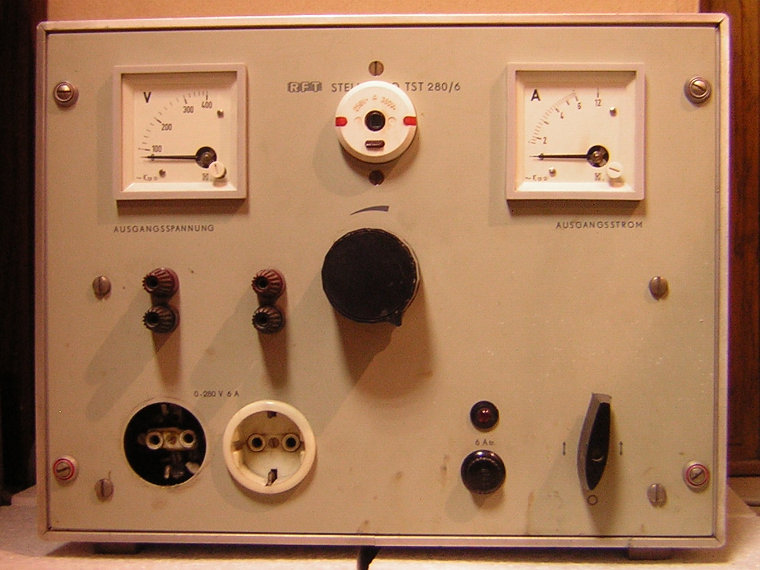 I intend to remove one pair of the banana plugs and replace the other one with completely isolated ones. Also one of the power outlets will be sealed and the ground connection to the remaining one removed.

Worrying about desoldering when you only have an old 30 Watt ERSA soldering iron seems unreasonable. But I remember being so frustrated with desoldering double sided boards when I was younger and also whenever I had to do some small repairs since then. So even after a short time I would not want to miss a tool such as the ZD-915 desoldering station. Dave Jones from the EEVBlog has a video on it. Or at least a very similar version. Check it out: EEVblog #542 - ZD985 Desoldering Station. It was quite difficult to find here in Germany but a small seller offered it for about 80€ an Amazon. It is sold under various brands. Just look for "ZD-915" or similar model numbers.

I also went on a little shopping spree ordering all kinds of small parts. A breadboard, some component sets, test leads, 1kg of PCB scrap and so forth. If you have read until here you probably know the drill. There is always something small in those catalogs that you need and in the end you do not know why the bill has gotten so high.

The Bench - No Space

I have always had some space in the workshop in the basement. As mentioned above some stuff has basically been untouched for more than a decade. But from some of the pictures above you can already guess that it is not nearly enough.

However I do have some sort of a plan to get some more room for a proper workbench. Mainly by cleaning up and moving some machines and furniture around. But you know one thing leads to another and the projects keep popping up.

A little show stopper is a self-made immovable Styrofoam cutter. I need it regularly to make special shipping containers. It works with a hot wire, an old PC power supply and a hideous 555 pulse width modulation circuit for heat regulation. I don't even know if it spits out proper PWM. It just works and makes annoying noises.

So this thing needs to go. Or more precisely it needs to be replaced by a new handy and movable version. So well that's the project that needs to be handled first or so is the constraint that I have set myself.

The mechanics of it are almost done. But the proper PWM regulation hast turned out to be not that easy after all.

Turns out I seem to be good at creating the need for projects out of thin air. But maybe that will make this blog a bit interesting for you out there. Anyway. This was meant to be an introductory post a bit longer than "first post" and giving a bit of background.

Stay tuned for updates on the PWM for the Styrofoam cutter project. It's in the works and more details should be here soon.